These are the best countries for women to work in

The World Bank’s Women, Business and the Law index reveals wide variations in women’s rights at work. Overall, it says women have only three-quarters of the employment rights that men enjoy.

The nations with a perfect score in the Index are Belgium, Denmark, France, Iceland, Latvia, Luxembourg, Sweden and, joining the list this year, Canada, which recently improved parental leave rights. In these countries, the index shows, women who work are on an equal legal standing with men, measured on indicators including access to jobs and protections on gender discrimination and sexual harassment in the workplace.

Although there have been improvements in many areas, with 40 nations enacting reforms to improve gender equality in the past three years, in the Middle East and North Africa, women workers still have just half the legal rights of their male colleagues.

But the index shows that countries most in need of improvement are making the fastest progress. Saudi Arabia and the United Arab Emirates head the list of most improved nations, having occupied the bottom two places in the global ranking in the 2019 edition.

The report makes clear that giving equal employment rights and increasing female participation in labour markets has clear economic benefits. Those countries at the top of the equality league table are outperforming those where women have fewer rights.

The World Economic Forum’s 2020 Gender Gap Report found that, although there has been progress in some areas, it will be a century before women the world over enjoy equal rights with men. 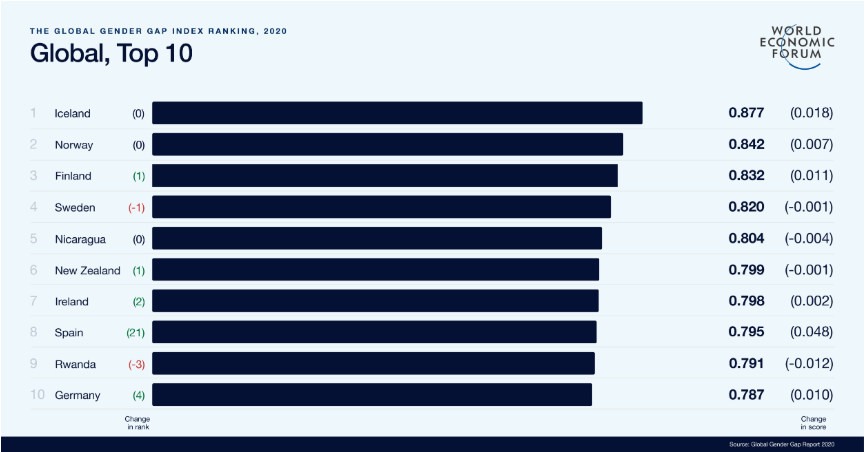 The index ranks nations by how close they are to completely closing the gender gap. The top countries are all in the Nordics, led by Iceland followed by Norway, Finland and Sweden. Pakistan, Iraq and Yemen have the largest gender gaps.

“Without the equal inclusion of half of the world’s talent, we will not be able to deliver on the promise of the Fourth Industrial Revolution for all of society, grow our economies for greater shared prosperity or achieve the UN Sustainable Development Goals,” says Forum Founder and Executive Chairman Klaus Schwab.

“At the present rate of change, it will take nearly a century to achieve parity, a timeline we simply cannot accept in today’s globalized world, especially among younger generations who hold increasingly progressive views of gender equality.”